Just like a Motif symbol, the artist, producer, D.J. and songwriter, Arbise Gonzalez aka Motiff is the unifying element between the artist and the music. His electronic-edgy sound with Latin influences shape the theme elaborated in his music. Motiff, was born in Caracas, Venezuela on September 25, 1984.  At the early age of 5 he began to play every instrument in sight.  He grew up by his father's side, influenced by his contribution to music.  His father was the percussionist for the Venezuela based and internationally known big band "La Billo's Caracas Boys.”  He began to integrate Motiff into the world of music and sound by taking him to recording sessions, rehearsals and shows. These close involvements led him to the acceptance into the Music Conservatory at the age of six where he later studied music theory and perfected performance of various instruments.  In 1996, Motiff brought his talent to the United States, assimilating to the culture while integrating his unique sound and rhythms to the diversity of the Miami music scene. In 2004, Motiff was given the opportunity to apply his gift and work closely with Jose Miguel Velazquez, a popular music producer and vocal coach to the stars. One beat at a time, he co-produced for Latin music artists such as David Bisbal, Don Omar, David Bustamante, Shalim and Pimpinela. In 2012, alongside music mogul, Emilio Estefan, Motiff co-produced superstar Gloria Estefan’s hit dance song “Hotel Nacional.”  “Hotel Nacional” debuted at #1 on the Billboard Hot Latin Songs Chart and placed #1 on the Billboard Dance Charts. He is the mastermind behind hits such as Jencarlos feat. Pitbull & Cata's "Baila Baila" and the Billboard chart topping hit "Pegate Mas" by Dyland and Lenny. In 2013 he joined Pitbull's "Global Warming Tour" as part of the Artist's band 'The Agents’ while collaborating on Samo’s Album ‘Invevitable’ , Jbalvin’s freshman album ‘La Famila’ and his first single as an artist, "I'll Be Fine" released in spring of 2014. 2014 and 2015 brought new challenges and opportunities as he produced “Que Suenen Los Tambores” for salsa singer Victor Manuelle.  This was the only song to stay at #1 on the Billboard Tropical Chart for 9 consecutive weeks in 2014, Victors biggest hit since 2004.  At the same time he produced the second single for Latin Artist Natalia Jimenez called “Quedate Con Ella.”  This would be followed by another 6 songs on Jimenezs’ Album “Creo En Mi,” which debuted at #2 on the Billboard Latin Album Chart. Well into 2015, Motiff has worked on Chino y Nacho’s album ‘Radio Universo’  producing the first single called “Me Voy Enamorando” Ft. Farruko. Followed by Gente De Zona’s “La Gozadera” Ft. Marc Anthony, which earns the highest debut on Hot Latin Songs Billboard Chart. The song logged nearly 4,000 downloads sold its’ first week, according to Nielsen Music, enough for a No. 7 debut on Latin Digital Songs and would eventually reach No. 2 in the Hot Latin Billboard charts. “La Gozadera”  would be the first single of Gente De Zona’s up coming album, “Visualizate” , in which Motiff produced a total of 9 tracks, including the second single “Traidora” also featuring Marc Anthony.   For Booking Inquiries: [email protected] 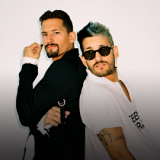 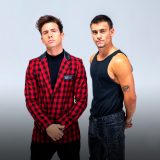