o·pus noun: An artistic work, especially one on a large scale. — the dictionary

IN ALL DIGITAL PLATFORMS AND STREAMING SERVICES 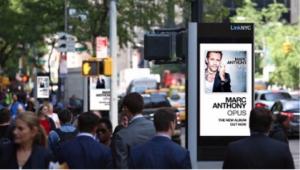 As part of the OPUS release, day rollout Marc Anthony will be taking over the streets of New York City with a full feature in Manhattan’s LinkNYC network of over 1000 digital billboards from 8 am to 9 am. The campaign will continue throughout the weekend in all borough.

Marc, chose the title Opus early on in the production process emphasizing its role as a solid masterwork within his massive, much-praised discography.

Recorded at Art House Society and Criteria Studios in Miami, Florida, Opus is a blistering-hot set of state-of-the-art salsa that finds Marc Anthony teaming up once again with pace-setting producer/pianist Sergio George, who produced Marc’s first salsa megahits and co-produced his 2013 album 3.0 (which was certified 8x Latin platinum). Their imaginative, innovative, and massively popular productions revolutionized the sound of music, bringing millions of young listeners to tropical music.

In Opus, the fundamentals are always present. A knocking band of the greatest musicians in the business, playing for dancers who like to sweat. Perfect, passionate lyrics of love and its consequences. A tour de force of orchestration, built on top of a salsa-band infrastructure of trumpets and trombones. A rhythmic drive that draws on contemporary and legacy styles from Cuba and Puerto Rico, with touches of Colombia, Jamaica, Spain, jazz, gospel, and more, to create a pan-hemispheric pop style that sounds natural in any country of the Americas. Energetic, surprising arrangements. A fat mix. And above it all, Marc Anthony’s voice at full spellbinding power, navigating the songs’ dramas with intensity and nuance.

The “OPUS U.S. Tour” was announced earlier this week and will take the music icon to the following cities:

Get your tickets now! 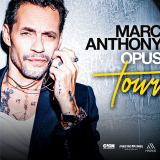 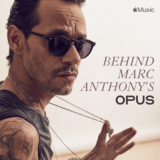